Based on research by Howard Martin, Tribal Historian. As published in the 2014 Tribal Chief Inauguration Program 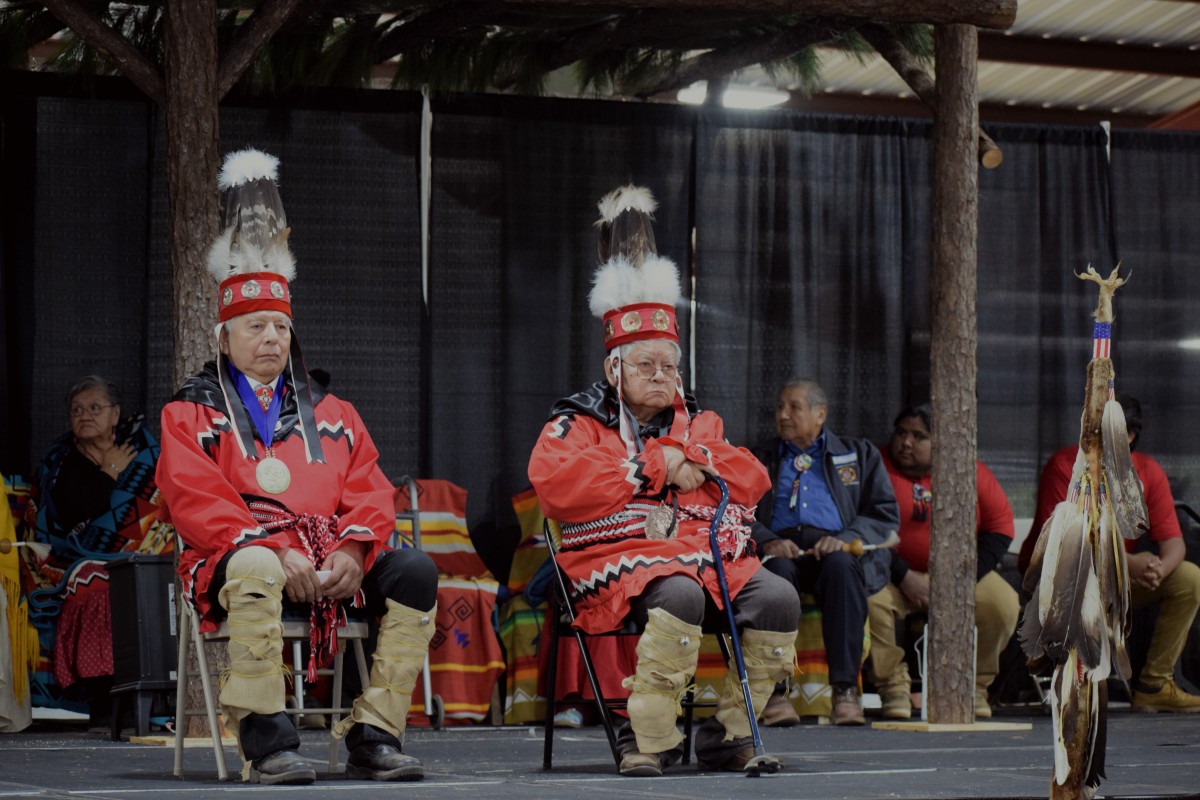 The Alabama-Coushatta Tribe calls its reservation home in Southeast Texas located 17 miles east of Livingston in Polk County, Texas. Although recognized as two separate tribes, the Alabamas and Coushattas have been closely associated throughout their history. Both of Muskogean language stock, they lived in adjacent areas in the present state of Alabama, followed similar migration routes westward after 1763, and settled in the same area of Southeast Texas.

Culturally, these two Tribes have always been one people, despite minor differences. Their languages are mutually understandable, although some differences occur in individual words. The closest tie has been that of blood, as intermarriage has been the rule since the earliest times.

Before 1859, Alabamas and Coushattas established and occupied several prominent villages in the present counties of Polk, Tyler, and San Jacinto. In 1854, the Alabamas received a grant of 1,110.7 acres of land in Polk County for a reservation. Since a grant of land for the Coushattas was never patented, State Agent James Barclay wrote that in 1859 the Coushattas, with the permission of the Alabamas, began moving onto the Alabama’s Polk County reservation.

This merging of the two tribes on the same reservation provided additional evidence to support the use of the hyphenated term “Alabama-Coushatta” in subsequent references to these Indians.

As articles for the Handbook of Texas (to be published by the Texas State Historical Association), Howard Martin has written biographical sketches for the chiefs whose name appears below.

CHIEFS OF THE ALABAMA INDIAN TRIBE

Born near Lafourche, Louisiana, in approximately 1780, Chief Antone was the elected principal chief of the Alabama Tribe in Texas about 1806. The principle Alabama villages were located in northwestern Tyler County near the Neches River. Antone died about 1870.

Colabe served as second chief of the Alabamas during the chieftainship of Antone. He became skillful in the use of four languages: Alabama, English, French, and the Mobilian trade language. He served as an official “Prime Minister” to Antone, attending numerous conferences relating to the Alabamas.

He also translated for Antone when it became necessary. Colabe was the grandfather of the late Chief Bronson Cooper Sylestine.

CHIEFS OF THE COUSHATTA INDIAN TRIBE

Long King was chief of Long King’s Village, the Middle Coushatta Village, three miles north of the Trinity River near the junction of Long King Creek and as the Mikko or principal chief of the Coushattas in the official records of the period.

Colita was an outstanding leader of the Coushatta Indians of Texas during the first half of the nineteenth century. He served first as chief of Colita’s Village (the Lower Coushatta Village on the Trinity River in San Jacinto County). He then succeeded Long King as Principal Chief of all the Texas Coushattas after Long King’s death approximately in 1838.

Ben-Ash was chief of the Battise Village. He served during the first half of the nineteenth century. This village was located on the west bank of the Trinity River at the Coushatta Trace crossing of the Trinity near Point Blank in present San Jacinto County.

Tempe (Timpey, Timby) became chief of the Middle Coushatta Village after the death of Long King, approximately 1838. Well known among Texans during the early decades of the nineteenth century, Tempe occasionally received greetings from Sam Houston through letters or messengers. Tempe Creek in western Polk County was named for this Coushatta Chief.

Long Tom, a Coushatta Indian Chief, was successor to Long King and Tempe as leader of the Coushattas, who lived along the valley of Long King Creek in western Polk County.

NOTE: After 1859, a small number of Coushattas remained in the Colita Village in San Jacinto County under the leadership of Chickasaw Abbey and Mingo. The last of these Coushattas moved to the Alabama-Coushatta Reservation in 1906.

CHIEFS OF THE ALABAMA-COUSHATTA INDIAN TRIBES OF TEXAS

John Scott, the principal chief of the Alabama-Coushatta Indian Tribe of Texas from 1871 to 1913 and grandson of a chief of this Tribe before these Indians came to Texas, was born in 1805 near Opelousas, Louisiana. Stott moved with his family to Peach Tree Village in northwestern Tyler County, Texas. Later, they relocated to Fenced-In Village three miles southeast of Peach Tree Village, followed by James Barclay Village, then Rock Village in eastern Polk County, and finally to the present Alabama-Coushatta Reservation, arriving at this reservation during the winter of 1854-55. He served in the Confederate Army during the Civil War, was an active leader in the Presbyterian Mission Church on the reservation, and served as a trustee of the Alabama-Coushatta community school. He died March 3, 1913, and rested in the reservation cemetery.

John Walker was elected second chief of the Alabama-Coushattas in 1871. Records are unavailable as to the length of his service as second chief.

He was born on this Tribe’s reservation in Polk County, Texas, in 1860. Not only did he become a leader in tribal business, church activities, and school development, but he also ranked above all other tribal members in efforts to focus attention on Alabama-Coushatta cultural heritage. He died September 8, 1935, and was buried in the tribal cemetery on the Alabama-Coushatta Reservation.

Battise served as an interpreter to Charles Martin Thompson.

Bronson Cooper Sylestine (Tic-Ca-Itche) was principal chief of the Alabama-Coushatta Tribe from 1936 to 1969. He was born on this Tribe’s reservation on March 7, 1879. He was elected tribal chief in November 1935 and inaugurated January 1, 1936. He was widely respected for his leadership and influence among the Alabama-Coushattas. He died on February 23, 1969, and was buried in the tribal cemetery.

Kina Robert Fulton Battise was inaugurated principal chief of the Alabama-Coushatta on January 1, 1970, and served in this position until his death on February 9, 1994. He was elected second chief in 1935, and began his service on January 1, 1936. He lived in a wood frame house until his death, insisting that tribal members get new homes before he received one.

The Alabama-Coushattas chose Emmett Battise to serve as their second chief after Robert Fulton Battise became principal chief. He served as second chief until his death on October 21, 1991.

Donnis B. Battise was elected as Second Chief in September, 2020 and was inaugurated on January 1, 2020.